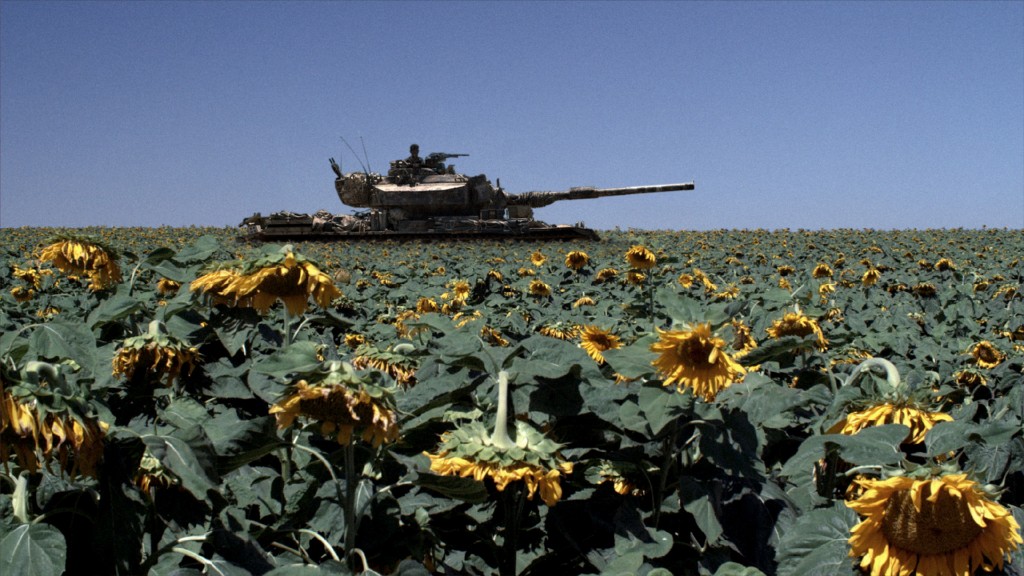 Lebanon by Israeli filmmaker Samuel Maoz, has just been awarded the Golden Lion for Best Film at the 66th Venice Film Festival. The narrative focuses on the events of a war that took place 27 years ago, the 1982 war in Lebanon, but it could be about any war, all wars. Filmed almost entirely inside a tank, Lebanon is a movie about distance. The space between: the interval in which we experience emotion, the distance between thought and action, who we think we are, who we become and who we can never be again.

In the first scene, a field of sunflowers fills the screen. The sunflowers are alive; they are bent, yet with a certain grace, color and beauty. They seem almost grateful for the rush of wind in their leaves. The open sky and field of flowers seems full of possibility – yet they are clearly towards the end of their bloom. You could almost think: this is the last time we will see the sky.
And it is.

Space and time are such strong elements in the movie. That first scene encompasses so much in terms of the conflict – there is all the time in the world to look at the flowers, but the flowers themselves are about the fall and fade. There is a wide field and sky – no boundaries, borders, limits – and that is about to change.

Once the young gunner Shmulik enters the tank – the world collapses, becomes dark and closed and time is no longer eternal. I found it significant that the first vision of the tank is a reflection – reversed, somewhat distorted. All one’s senses are working during this film, much of it due to the excellent photography. There was a wonderful sense of texture – it felt greasy, sticky, and rough. I am thinking of the scene after the tank is hit – when there are the little yellow squares of “soup croutons” stuck everywhere, and I can almost smell that synthetic smell mixed with oil and something burnt and stale. Distortion, vision and memory all work together very intensely in the film.

Those first close-ups on Shmulik set up his character as introspective by letting you look at him so closely, letting you see him looking around and assessing his new environment. It is not Shmulik you are seeing, but rather Shmulik’s memory of his young self – and there is that sense of acknowledged distortion, the reflection of a reflection, shadow of a shadow. This is the reality: that we cannot see ourselves, vision and memory each carry their own distortion.

There is so much visual information coming in at once and through such a narrow opening that it feels almost physically frustrating, but at the same time the details are sensually, lovingly portrayed as someone’s eye lingers on the cigarette falling into the puddle on the floor of the tank. Time is distorted in the same way – there is no time to access what is happening or how to respond, yet at the same time the moment feels suspended, expanded, magnified beyond human proportions.

Seeing the movie reminded me of the Greek myth of Demeter and Persephone – Persephone is out wandering in the fields with her friends. Hades sees her and decides to take her as his bride. She falls, literally disappears into the dark earth and becomes his captive. Her mother, Demeter, goddess of the earth and harvest, goes into mourning. Nothing grows, eternal winter covers the earth. Demeter continues to fight for the release of her daughter and Zeus agrees that Hades must return Persephone to earth and her mother, on condition that she not have tasted any food or drink in hell. Persephone had resisted for a long time, but Hades had finally succeeded in making her eat six pomegranate seeds. She was allowed to return to her mother, but because she had eaten the seeds, she was compelled to spend half of each year with Hades in hell.

I have that same sense about the young men in the tank (and the other soldiers). They have fallen into this dark abyss and they may be able to find their way out, but they will never be the same again. Israeli culture has its Demeters who mourn the loss, yet are not powerful enough to prevent it. I don’t want to push the analogy too far – but there is some sense in which the end of childhood/youth in Israel is this fall into hell. And you cannot be in hell without tasting of it, taking it into you.