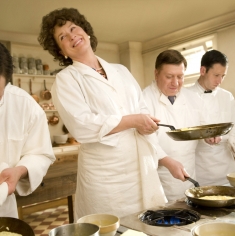 “I know someone who tried using her recipes and they all came out awful, and besides, they’re full of butter.” The only thought that kept me from leaping out of my chair in Julia’s defense was that such a lunge would be an admission of eavesdropping. Clearly, Julia Child has no need of my meager defense – the auditorium was packed with people eagerly awaiting the screening of Nora Ephron’s film: Julie & Julia at the Haifa International Film Festival. But I do want to say a few words in praise of butter, and its bold advocate Julia Child.

Butter represents everything contemporary culture would deny us: calories, cholesterol and flavor. Julia Child was so many things a woman should not be, particularly a woman of her time: tall, adventurous, vocal, and emphatically enthusiastic about her love of food.  Health-mongers dictate the pursuit of an eternal life of unchanging perfection: slim, compact, containable, predictable – dare I say, boring? A life where everything is calculated, from calories to coitus, programmed from the first glimmer of our pre-natal existence. The outcome, however, remains unaltered. Denying myself crème brûlée will not make me immortal.

Knowledge of ultimate mortality should imbue the present moment with intensity, excitement, generous helpings of delicious food, and at the very least a brave attempt to fulfill our heart’s desire. This attempt is at the heart of Julie & Julia, written and directed by Nora Ephron and based on the memoirs of Julia Child, who introduced America to French cooking, and Julie Powell, who cooked and blogged her way through Child’s 524 recipes in 365 days.

As a full-time eater, part-time baker and writer this was clearly a movie that I would either love or hate. I enjoyed almost every bite, and can easily forgive the rest. Speaking of forgiveness, Meryl Streep has a tendency to be Meryl Streep no matter what role she is playing, but she is so wonderful, I forgive her. Here, however, there is a pleasant surprise for anyone familiar with Child’s televised cooking show: she sounds just like Julia. The two narratives alternate throughout the film. Opening with Julia’s move to Paris in 1949 with her diplomat husband Paul, her life plays out like a fantasy – “I can’t believe we get to live in Paris” – in counterpoint to Julie’s narrative. Tiny apartment near the train tracks, a difficult, low-paying job and a critical mother provide all the necessary elements for a spunky heroine to blog her way to happiness.

It’s an urban fairy tale with a dash of cultural history. Raised on a multicultural mix of sushi, enchiladas, injara, Tom Yum and everything green in between, younger audiences are blissfully unaware of the arid wasteland that was American cuisine in the early 60s. Marshmallow Jello salad – need I say more? Julia Child not only changed the way Americans eat, she influenced the way people thought about food and cooking. Attentive to detail, blithe about mishaps and unabashedly enthusiastic – she was informative, funny and brave. Armed with “Mastering the Art of French Cooking” anyone could dare to try even the most daunting recipe.

Julia Child is a living presence in many kitchens, including my own. Whenever anything went wrong, in cooking or the rest of life, my mother would invariably quote Julia: “I’m awfully glad this happened.” Every mistake was an opportunity for improvisation, learning, invention, or at least temporary hilarity. Despite a congenital inability to follow directions, every recipe I have tried has turned out delicious, and yes, I love butter.  It was Julia who gave me the courage to make pie crust, and for that I thank her, but that, gentle reader, is another story.

The Day After – Film & Discussion Program