Las Herederas (The Heiresses) is an intimate, precisely observed and sensitive film, bold in its focus on older women in relation to sexuality, identity, and class differences. Written and directed by Marcelo Martinessi, the film is set in Paraguay, and offers a view into the privileged, sheltered and restricted lives of women who come from wealth. Commerce and politics are the realm of men who are beyond the frame, out in the world; the world of women is confined, as the film is, almost entirely to interiors. Las Herederas won the Alfred Bauer Prize at the 2018 Berlin Film Festival, as well as the FIPRESCI Prize, and the Silver Bear for Best Actress was awarded to Ana Brun for her portrayal of Chela. 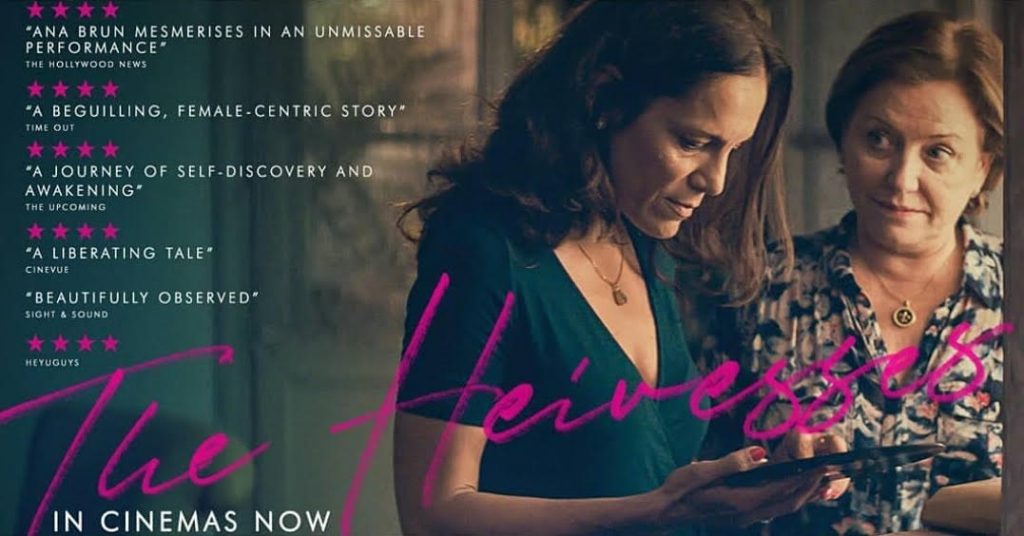 Chela (Brun) and Chiquita (Margarita Irún) have been together for many years, perhaps their entire adult lives, living in Chela’s family home. Chiquita is energetic and outgoing, while Chela is the quieter, more passive of the two, spending her days painting muted abstractions. Chiquita cares for Chela in every way, yet in choosing to be utterly catered to, in her passivity, Chela is relinquishing control over her own life. Now they have come to a crisis, and each will meet it in her own way.

Fallen on hard times, they are forced to sell their family heirlooms – paintings, crystal, furniture – in order to make ends meet, and keep up appearances with their affluent social circle. These measures have not, so far, kept them entirely out of trouble, and it turns out that Chiquita will have to go to prison (shades of Dickens), charged with fraud for signing promissory notes. Given their dwindling resources, the couple must now make do with a less polished, illiterate, new maid Pati (Nilda Gonzalez), to whom Chiquita gives meticulous instructions on caring for Chela, saying, “sometimes the lady does not feel well.”

Suddenly alone after so many years, the pampered, sheltered queen of self-pity Chela must navigate on her own. When her selfish, barb-tongued neighbor Pituca (María Martins) more or less demands to be driven to her daily bridge appointment, it’s not entirely clear why Chela (who does not have a valid driver’s license) agrees. Perhaps it’s because she is so accustomed to doing what she is told, and perhaps she is fearful of rousing the ire of gossip-monger Pituca. Yet she soon finds ample motivation in the presence of sensual, vivacious Angy (Ana Ivanova) at the club.

Ana Brun delivers a magnificent, nuanced, performance as Chela, the viewer literally experiences this world and its people through her eyes. The entire ensemble cast is excellent, and Martinessi directs with a very sure hand in this debut feature. Chela’s first glimpse of Angy is so subtle, one might almost miss it. Yet by that point in the film, Martinessi has led the viewer into Chela’s muted experience of the world, and one becomes attuned and attentive to every subtlety. Just as revealing is a domestic interlude, with Chela vacantly staring at the television while Pati rubs her feet, barely acknowledging Pati’s presence and attentions. Martinessi makes no allowances for his characters, depicting them as they are, in all their qualities.

It’s rare to see older women as central figures onscreen, and even more rare to see their sexual desires depicted with such intelligence and candor. Typically rendered invisible and irrelevant, when a film does focus on an older woman’s sexuality it is all too often treated with hyperbole, ridiculed or demonized. One formidable exception is Sebastián Lelio’s Gloria, yet there the protagonist is someone who (at least initially) defines her sexuality only in relation to men. Poignant and inspiring in its celebration of quiet, incremental personal revolutions, Las Herederas stands out in its focus on women’s relationships with women.

Las Herederas is presented by TLVFest, and will be shown at the Tel Aviv Cinematheque from November 15 – December 6, 2018. Link to order tickets here.

The Goddess of Fortune