Ever wondered what goes on in your therapist’s mind? Milorad Krstić takes viewers on a visually eclectic rollercoaster ride through art history and the subconscious of Dr. Ruben Brandt, whose unique problem is the catalyst for this stylish animated crime thriller. Playful and intriguing, Krstić’s feature debut is a fast-paced, jazzy, noir film, replete with references to art, pop culture, and film. It’s an art lover’s fantasy set to a fantastic soundtrack, a film to savor time and again. 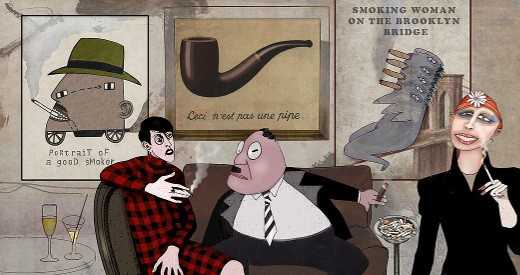 A successful psychologist (his clinic is an architectural dream), Dr. Brandt (voiced by Iván Kamarás ) believes that art can be a key element in healing. Yet it is the source of his suffering: figures from famous paintings – Manet’s Olympia, Botticelli’s Venus – attack Brandt in his dreams, and he is desperate for a solution. When Dr. Brandt tells his clients to “possess your problems in order to conquer them” they take him literally, and the art-theft spree is on.

All the beloved noir/action elements are on board – femme fatale Mimi (voiced by Gabriella Hámori), who happens to be an acrobat kleptomaniac; art theft expert Mike Kowalski (voiced by Csaba “Kor” Márton) determined to track down the thieves; a scintillating chase scene; dive bar complete with sultry singer; and secrets, plenty of secrets. Other moments, like a view of Paris at night from the perspective of a gargoyle, are simply beautiful. There’s a wonderful merging of styles, with painterly skies and Picasso-esque faces with several eyes. The film employs different animation techniques (digitally hand drawn, computer animation and 3D animation) to achieve its distinctive look. The soundtrack follows the same genre-hopping path, with original music composed by Tibor Cari, as well as versions of popular songs from Puccini’s Nessun Dorma to Oops I Did It Again.

You don’t need to be an art expert, or even an art aficionado to enjoy this exhilarating adventure and its wry humor. Ruben Brandt (his name alluding to the painters Rubens and Rembrandt) has a very colorful cast of clients-turned-co-conspirators, with their maladies and quirks. One talks too much, another can’t resist leaving a signature each time he pulls a heist, and a third is two dimensional. The film is intended for adults, and does contain quite a bit of violence, but savvy older kids will appreciate the art and humor.

Milorad Krstić was born in Slovenia and has lived and worked in Hungary since 1989. He is a multi-disciplinary visual artist whose work includes drawing, painting and sculpture, and the film reflects the depth, versatility and richness of his artistic background. Krstić’s short film My Baby Left Me won the Silver Lion at the Berlin Film Festival and Best First Film at Annecy in 1995.

Ruben Brandt, Collector will be screened on September 24th and 28th. Tickets and additional information may be found on the Haifa Film Festival website.