Still searching? You are not alone! In his latest documentary film Searchers, director Pacho Velez interviews a diverse and intriguing set of people as they browse popular dating apps, searching for love, money or just a good time. Whether you are still searching, have done the dating app dance before, or refuse to have anything to do with the internet, Searchers offers a fascinating look into what is usually a very private experience. Although such a film might seem to be verging on voyeurism, it is immediately apparent that all the people interviewed are active, and possibly even enthusiastic, participants.

The people interviewed represent a wide range of ages, with the youngest at 19 and the oldest at 88, as well as different sexual preferences, ethnicities and relationship goals. Each interview lasts a few minutes, documenting the process of looking, reading, and thinking aloud about prospective partners. Some are filmed together with a friend in conversation. There is a short follow-up interview with a few of the people, but for the most part, the viewer does not know whether anything develops. Ultimately, the film is a series of brief encounters, yet each of these encounters is deeply intimate. In this sense the film is reminiscent of Manakamana, a film Velez directed with Stephanie Spray, that was screened at Docaviv in 2014. In Manakamana, Velez and Spray filmed people as they rode the cable car to the Manakamana Temple in Nepal. Each episode filmed lasted as long as the ride, and documented whatever the riders did or said on the journey, even if they spent the entire ride in silence. An unusual film with an unusual premise, somehow, over the course of the 9-minute ride, a connection develops between the viewer and the people in the cable car. As I watched Searchers, I felt a similar sense of intimacy and connection.

The set-up is very clear and identical for almost every interview. The subjects are seen in a close-up shot, while they look directly at the app, and give their verbal instructions to a person who controls the app. The image seen on the app is also superimposed, out of focus, on the shot. In other words, the viewer sees the subject’s face, and a fuzzy, partial image of what the subject is looking at. This approach takes the viewer into the private space of the subject, without compromising the privacy of the individuals registered to the various dating apps who are not part of the film. Making the playing field as level as it can possibly be, Velez himself is part of the film, appearing in connecting shots and in the background as he records and films, and responding to the occasional personal question from the interviewees, but more crucially, he too appears in the film, looking at a dating app and sharing his thinking process with the world. The apps used by people in the film include: Tinder, Hinge, Match.com, OKCupid, Bumble, Adam4Adam, Lex, Grindr, and Seeking Arrangement. Another interesting aspect of the film is that it was shot during the pandemic, yet only one interviewee even mentions that fact. The B-roll sequences follow people on the streets of New York, with different montages of couples. One sees people wearing masks, so the pandemic and its impact in terms of social distancing and sense of isolation is always there in the background, yet it is not a focus of the film. 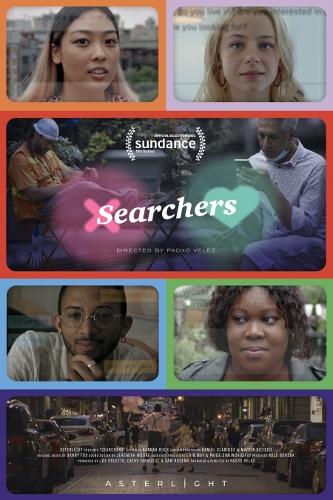 Honest, direct, and remarkably open, the people interviewed, and their perspectives on dating and relationships are at once entertaining and poignant to observe, their stories, opinions, and responses often surprising. Some of the scenes are very funny, as when Ruddy calls out “No! His forehead is huge!” Yet he follows this with the comment: “I feel very judgey.”  In another segment, two men in their 70s discuss the merits of meeting for coffee as opposed to going out to dinner on a first date, and another scene features two very pretty Sugar Babies discussing optimal pricing. Scrutinizing the screen with his face scrunched up in concentration, 55-year-old Jon asks “Are there any black men here?” Ultimately, the story he shares later on is one of the most moving. One of my favorites was 88-year-old Helene, who commented on men looking for women who are much younger, saying that 60-year-olds are looking for women who are 45 – 50, 70-year-olds will go up to 60, and it sounded like a familiar complaint. Yet then she went on to say “I feel the same way! I don’t want anything over 60 either!”

Searchers will be shown at Docaviv – the Tel Aviv International Documentry Film Festival, participating in the Depth of Field Competition. The festival will take place from July 1 – 10, 2021. Tickets and additional information may be found on the festival website: https://www.docaviv.co.il/2021-en