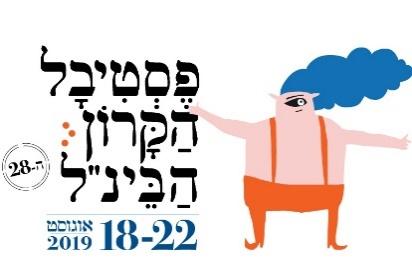 The 28th edition of the Jerusalem Puppet Festival will take place from August 28 – 22, 2019. The festival will feature shows from four European countries – Germany, Lithuania, Belgium and The Netherlands, as well as Israeli premieres, with shows for adults and children. Liberty Bell Park will be the festival’s main venue, with a variety of activities taking place each day from 10:00 to 23:00, including free workshops during the morning hours. Food trucks (kosher) will offer a diverse menu throughout the day, and at night, the bar will open to the tunes of a DJ party. The Puppet Festival is initiated and produced by the Train Theater, managed by Train Theater CEO Yizhar Floresheim, and under the artistic direction of Shahar Marom.

In addition to the shows, there will be an outdoor Village of Fairies and Elves (there is an admission fee), created by 20 artists, with a fairy band, an upside-down classroom, an enchanted tree, and more.

Summer Rain 5 – a special production – the best of creations from the Train Theater’s “Greenhouse,” a training program in artistic puppet theater for children, Alef-Bet Legend – a special performance featured at the festival’s premiere: One night, a worker at the Beit Midrash who cannot read discovers that the letters have spread their wings and left the holy books… Sounds and Shadows – a special festival performance – a pre-premiere of an album of children’s songs, with eastern music by the band “Ecoute” in partnership with shadow puppet theater master, Patricia O’Donovan, who will present shadows and characters during the songs. A premiere of the show “A Concert in the Sand” – a Train Theater production – the story of the first concert of the philharmonic orchestra in Tel Aviv, which will open the festival in a festive event in Zedekiah’s Cave and will be performed again for the general audience during the festival.

Train Theater Performances such as: Moustache the Cat, Toto and Friends, The Hungry Sandwich, Lost Crown a special and relaxed performance under the auspices of the Autism Treatment and Research Center. Stork Gift – a special performance from Lithuania, inspired by the old legend that tells the story of how the storks bring children into the world. Object theater accompanied by live music. Tailor Made, which recently won the prize for the best performance at an important puppet theater festival in Europe and more.

Another special production for the festival: Wild Puppets – three hilarious performances using different object and puppet theater technique. One of the shows are by the Belgian TOF Theater, one of the world’s leading theaters, a short, brilliant work in which a puppet under construction decides to take a stab at finishing up the job itself…

FREEZE – a fascinating show by the Dutch artist (Nick Steur). A charged meeting between the power of the artist, the strength of the rock and the presence of the audience. Object theater for adults with creator and artist Ariel Doron, with two performances at the festival BOXED and PLASTIC HEROES. ‘Tavas’by the artist Benyamin Yom-Tov, inspired by strong, archetypal characters who exist in the artist’s inner and outer worlds. ‘Silvery’ by the artists Hila Flashkes and Maayan Resnick – A performance with puppet theater, object theater and furniture. ‘Cheap Plastic Toy’ by the artist Gal Levinson – performance theater with colorful and cheap toys.

The well-known television puppet designer Maria Gurevich and the esteemed director Masha Nemirovskey will meet at the festival for an unusual meeting The Masters – two creators, different materials and one grand piano.

In addition, at the festival there will be professional artist meetings and a meeting with guests from the international exposure program, which takes place during the festival and is supported by the Ministry of Foreign Affairs.

The complete festival program is available on the Train Theater website. https://www.traintheater.co.il To order tickets call *3569

*Information and text provided by the Puppet Theater Festival